In patients with chronic kidney disease, special attention needs to be given to the Yo-Yo effect

- It is dangerous if the fluctuation range is large, regardless of whether it increases or decreases.

As obesity is known to be the root cause of many diseases, controlling your weight is the homework of everyone. The problem is maintaining weight loss. Even if you succeed in losing weight through hard work, you often experience the ‘Yo-Yo effect’. Recently, studies investigating the risk of such weight fluctuations have been actively conducted.

Using data from the National Health Insurance, the research team followed up 84,636 CKD patients for an average of 4 years. After dividing the sample into 4 groups of 21,159 persons in the order of weight change, the differences between the groups were observed. At this time, the group with the greater Yo-Yo effect had a poorer health prognosis. For example, the quartile with the largest change in mean weight had a 66.2% higher risk of death than the quartile with the smallest change. The risk of myocardial infarction, stroke, and end-stage kidney disease was also higher by 19.1%, 18.9%, and 20.1%, respectively. In particular, the higher the group, the more consistently the risk increased, showing a clear trend. Also, this tendency was independent of the direction of change in body weight. Although weight gain is often considered to be the only risk, there is also an increased risk when experiencing the Yo-Yo effect in the direction of weight loss. 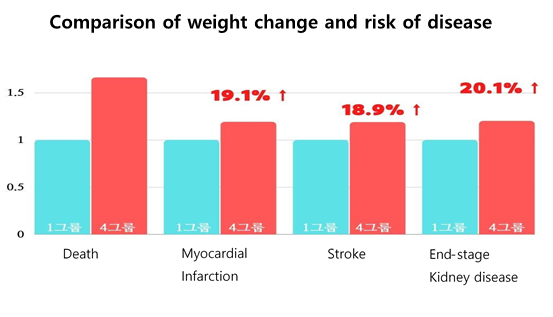 Professor Kim Dong Ki said, “We have confirmed that the phenomenon commonly referred to as 'Yo-Yo effect' can have a negative effect on CKD patients; it is necessary to control a healthy weight through continuous exercise. Also, rather than aiming for weight itself, it is desirable to aim for healthy behavior such as a low-salt diet or exercise.”

This thesis was published in the latest issue of 'Journal of the American Society of Nephrology (IF=10.121)', the most prestigious journal in the nephrology field.