The team of Professor Lee Seung-Pyo from the Department of Cardiology at Seoul National University Hospital (first author, Dr Kwak Soongu) revealed that myocardial fibrosis, measured by applying T1-mapping, a new cardiac MRI technology, is an important risk factor for the long-term prognosis of patients with severe AS. It was announced on the 23rd of August that it was the first to identify the threshold value of mortality in patients with AS.

Aortic stenosis is a disease in which the aortic valve on the way from the heart to the aorta does not open properly due to ageing. The narrowed valves cause pressure overload on the heart, which causes the heart to thicken and progression to heart failure. It appears as symptoms such as shortness of breath, chest pain, and fainting during exercise. In severe cases, it is a terrifying disease that can cause sudden death without notice. The prevalence is reported to be about 5% in people over 65 years of age and up to about 12% in people over 75 years of age.

The only treatment is to replace the diseased aortic valve with a new artificial valve through open thoracic surgery or percutaneous catheter replacement. Current medical guidelines recommend valve replacement if heart failure is present or even asymptomatic.

However, in the case of patients with asymptomatic severe aortic stenosis, there is still controversy over whether and when to perform surgery. What are the objective indicators and biomarkers that can quantify the structural and functional damage of the heart?

The research team built a random survival forest machine learning model that predicts death using a cardiac MRI database of a total of 799 multinational patients undergoing surgery or procedures for severe aortic stenosis at 13 research centers in the UK, Europe, the US, and Canada. The database consisted of clinical (n=12), echocardiography (n=4), and cardiac MRI (n=13) of a total of 29 variables.

As a result, it was confirmed that important markers in predicting the prognosis of patients with AS are diffuse fibrosis (ECV%) and replacement fibrosis (LGE%), which are indicators of myocardial fibrosis, and indexed left ventricular end-diastolic volume (LVEDVi) and right ventricular ejection fraction, which are early indicators of heart failure. (RVEF). Left ventricular ejection fraction (LVEF), which was previously known to be important, was found not to be important marker.

These threshold values (ECV%: 27%, LGE%: 2%) were significantly predictive of mortality even in patients with asymptomatic aortic stenosis according to independent test data. In particular, when these cardiac MRI markers were added to the existing risk factors in the final mortality prediction model, the predictive power of postoperative mortality was significantly improved.

The team said that a clinical trial is currently underway to determine whether early valve replacement based on these indicators can improve the prognosis of patients with asymptomatic but severe aortic stenosis (AS). This study is evaluated as suggesting the possibility of recommending surgery based on observed indicators in the future, even if the disease is asymptomatic, when the disease is severe AS.

Professor Lee Seung-Pyo announced, “This study is the largest multi-national, multi-center study in which T1-mapping, a new cardiac MRI technology, has been applied, among aortic stenosis studies conducted worldwide.” “The significance of the study is that it demonstrated myocardial fibrosis is an important risk factor for the long-term prognosis of patients with severe aortic stenosis and that the threshold value that predicts the patient's mortality from these indicators was identified for the first time,” he explained.

Dr Kwak Soongu emphasized, "It shows that these threshold values are meaningful even in patients with asymptomatic severe aortic stenosis, which has before been controversial as to whether and when to perform surgery."

The study was published in the latest issue of the Journal of the American College of Cardiology, a prestigious journal in the field of cardiovascular science. 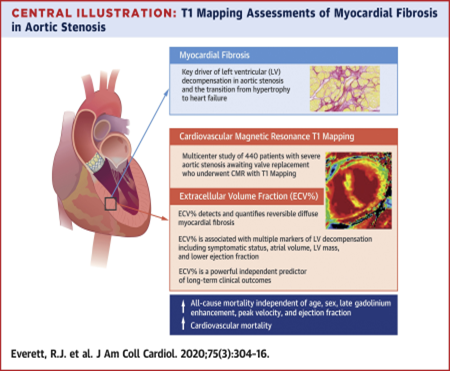 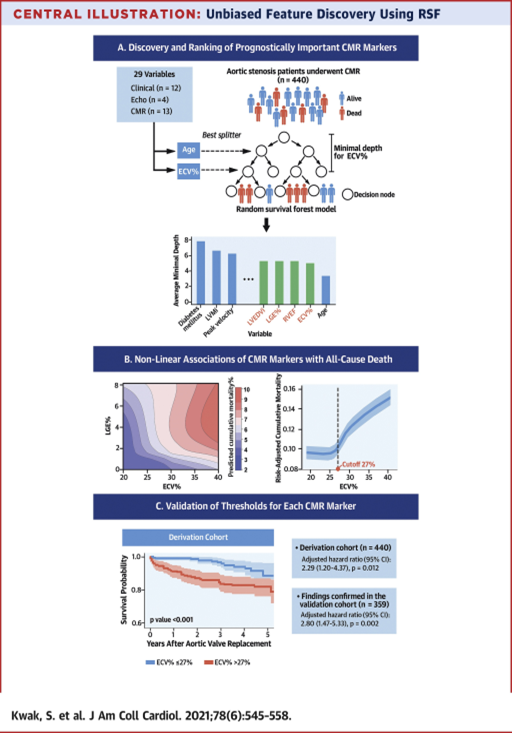 Panel A. We constructed a random survival forest model of patients with severe aortic stenosis undergoing valve replacement based on training data of 440 patients. The most important cardiac MRI parameters in the model were identified as ECV%, LGE%, left end-diastolic volume, and right ventricular ejection fraction.

Panel C. The clinical significance of the death threshold value of each of the indicators identified in panel B was demonstrated. That is, patients with an ECV% of 27% or higher had a significantly lower survival rate after valve replacement compared to patients with an ECV% of less than 27% (3-year survival rate 83.7% vs. 96.8%), and the risk of death due to an ECV% exceeding 27% was about 2.8 doubled.  The importance of these threshold values (ECV% 27%, LGE% 2%) was confirmed in independent test data and in patients with asymptomatic aortic stenosis, respectively.

Panel D. Aortic valve stenosis results in pressure overload of the myocardium and gradual fibrosis of the heart muscle. ECV%, assessed by T1-mapping, a novel cardiac MRI technique, is a quantifiable indicator of myocardial diffuse fibrosis and is an independent risk factor for postoperative mortality. ECV% and LGE%, indicators of myocardial fibrosis, are expected to play an important role in determining the timing of surgery in patients with asymptomatic severe aortic stenosis in the future. (Excerpted from a paper published in this 2020 'Journal of the American Heart Association') 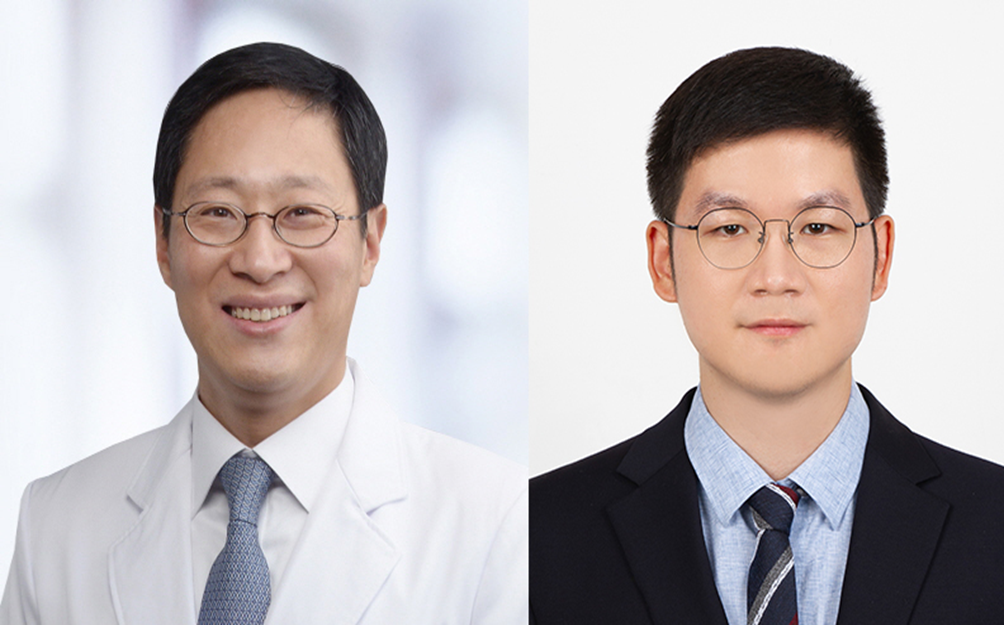 Next In patients with chronic kidney disease, special attention needs to be given to the Yo-Yo effect
Prev Patients with rheumatic disease have increased risk of COVID-19 infection
List