This research, led by Seoul National University Hospital Professors Kim Hyo-Soo and Kwon Yoo-Wook, was published in the Journal of Hematology & Oncology (IF; 17.4), a world-renowned journal in the field of foundational cancer research.

Angiogenesis is a process in which new blood vessels are created from existing blood vessel structures and is regulated by the interaction between endothelial cells and surrounding pericytes. While the role of vascular endothelial cells has been widely studied worldwide up until now, research on pericytes has been insufficient. Inhibiting angiogenesis can prevent cancer growth.

Professor Kim Hyo-Soo's team discovered that the KAI-1 (KAI1/CD82) gene was expressed in pericytes. For the first time in the world, they found that KAI-1 plays an important regulator role in inhibiting angiogenesis and maintaining vascular homeostasis.

The KAI-1 protein synthesized in pericytes increases the expression of the angiogenesis inhibitory factor LIF after it settles on the cell surface. In addition, KAI-1 inhibits angiogenesis by binding to VEGF or PDGF, the representative cytokines that induce angiogenesis, and blocking their receptors’ binding function.

The research team used the angiogenesis inhibitory effect of the KAI-1 protein to develop a new cancer treatment. The KAI-1 peptide was prepared by analyzing the molecular structure and amino acid sequence of the site where KAI-1 binds to the angiogenesis cytokines VEGF and PDGF. They also created a tumor model by transplanting breast and prostate cancer cells into mice. The tumors were nourished by the formation of numerous blood vessels and gradually increased in size. When the KAI-1 peptide was administered, the tumor size was dramatically reduced by inhibiting angiogenesis.

In an animal model of diabetic retinopathy, when the KAI-1 peptide was administered, it suppressed angiogenesis and showed a therapeutic effect of suppressing retinal blood vessel hyperproliferation to a level similar to that of normal standards.

The KAI-1 peptide can inhibit tumor growth and prevent cancer metastasis by inhibiting angiogenesis, so it is expected to improve patients’ results when used in combination therapy with existing anticancer drugs. It can also be used as a treatment for diseases caused by hypervascularization, such as diabetic retinopathy.

Since 2016, the research team devoted themselves to this study after announcing to the world that the KAI gene is the key to the immortal mechanism of bone marrow hematopoietic stem cells.

Professor Kim Hyo-Soo, who directed this project for five years, said, “With the hard work of various members of the center of CBT(Cell and Bio Therapy for heart, diabets & cancer), great results have been achieved. In the future, we plan to pursue advanced work to develop the KAI-1 peptide as a bio-therapeutic agent for anticancer and vascular retinopathy.”

Meanwhile, this project was carried out as part of the work being done at the center of CBT, which is supported by the Ministry of Health and Welfare, and research-oriented hospital. 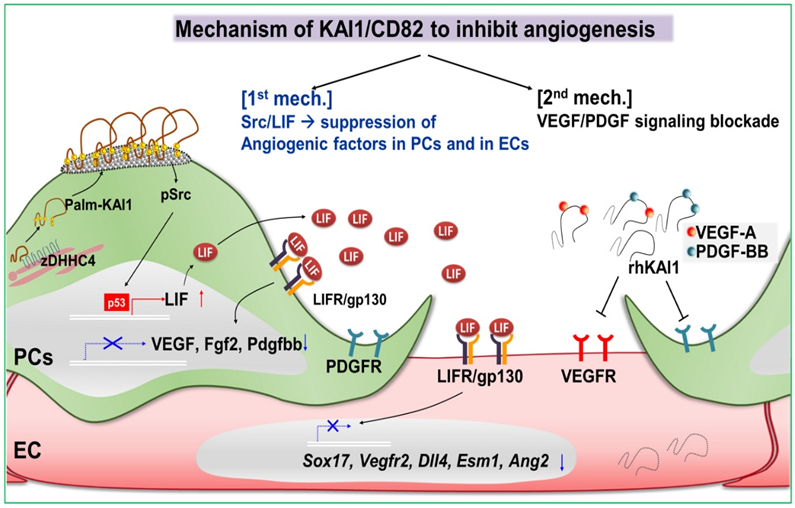 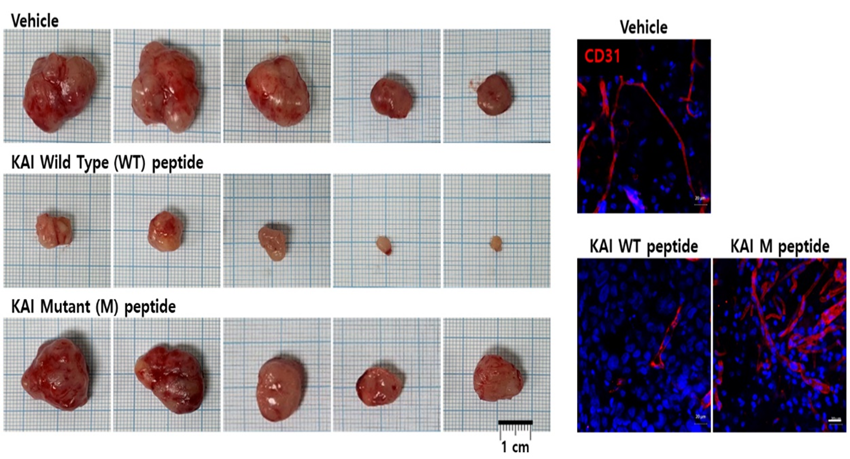 [Figure 2] Anticancer effect of KAI-1 peptide in a mouse tumor model. Treatment with KAI peptide may inhibit tumor angiogenesis and reduce the size of cancer. The control group, the mutated peptide, had no therapeutic effect on outcomes.

[Figure 3] KAI-1 expressed in pericytes located around blood vessels in the mouse retina. As shown in the picture on the right, when the KAI gene is knocked out, retinal blood vessels show overgrowth. 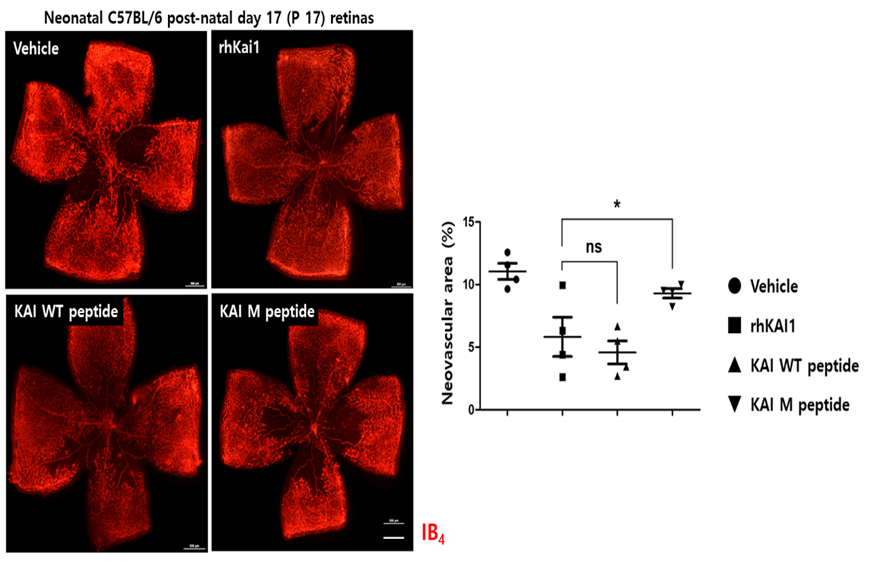 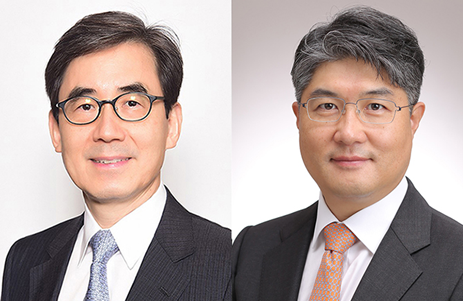 Next Hepatitis B: the sooner the antiviral treatment, the better
Prev Discovery of a peptide that promotes hair growth, opens the way to hair loss treatment
List