Courtesy of SNUH Research Team, Study on the effects of psychological wellbeing on CDK using a genome-wide association study meta-analysis

Relationship between the occurrence of CDK and overall happiness, meaning of life, depressive symptoms, neuroticism and sleep duration

The kidneys are responsible for the discharge of waste through urine from the body and electrolyte balance. Chronic kidney disease (CDK) is a condition of chronic damage in which the kidneys do not perform their functions. If it persists, you will eventually receive alternative renal treatment, such as dialysis or transplantation. As well as suffering general discomfort, the risk of cardiovascular disease or mortality is also increased.

When CDK occurs the causes of deterioration can vary. Mental health problems, often referred to as "stress," have been considered one of the causes of this deterioration, but previously there was insufficient academic evidence to support this.

The research team analyzed genomic data of about 1 million people used for research purposes. The research used the CKDGen consortium data of European ancestry and the individual-level data of White British UK Biobank participants for their sample database. The team also collected basic demographic information about patients, such as age and gender, as well as information about mental health, such as overall happiness, meaning of life, depressive symptoms, and neuroticism.

Our research outcomes using CKDGen consortium data showed that a genetic predisposition for positive effects was significantly associated with better kidney function. Those who reported people with a status of general happiness (happiness status: ‘moderately’, ‘very’, or ‘extremely’), showed approximately 31% lower risks of suffering CKD when compared with those who were unhappy (unhappy status: ‘moderately’, ‘very’, or ‘extremely’). Having a sense of meaning of life was also associated with better kidney function. Those who said they were leading meaningful lives had about a 23% lower risk of developing CDK than those who did not.

depending on psychologic wellbeing 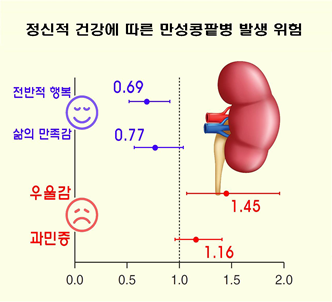 Figure 1. The effect of 4 psychologic wellbeing factors on the occurrence of chronic kidney disease (CDK). The risk of CDK was low with being happy and satisfied with life, however, if the degree of depressive symptom and neuroticism is high, the risk of developing CDK was high.

In another paper, the research team also reported on the relationship between sleep duration and chronic kidney disease (CDK) using CKDGen consortium data of about one million people. Classifying sleep duration into three groups (‘short (less than 6 hours)’, ‘intermediate (6-9 h)’, and ‘long (more than 9 hours)’), it was found that insufficient sleep duration showed a direct effect on increasing the risk of CDK.

This study is meaningful because it showed a direct relationship of causes and consequences between psychological wellbeing factors and CDK. It is known that adult diseases such as hypertension and obesity can cause kidney function damage, but formerly studies dealing with psychological wellbeing factors and the relationship between CDK were insufficient.

Professor Kim Dong Ki said "This study showed that psychological wellbeing affects physical conditions such as chronic kidney disease," and that "Medical staff need to pay attention to mental health, such as the psychological wellbeing status and sleep duration of the patient, in addition to existing known medical indicators such as blood pressure and blood sugar levels."

The above two studies investigated the effects of psychological wellbeing status and sleep duration on chronic kidney disease on a large-scale study, respectively. Both studies were published in the recent issue of the Journal of the American Society of Nephrology, the most prestigious journal in the field of nephrology.